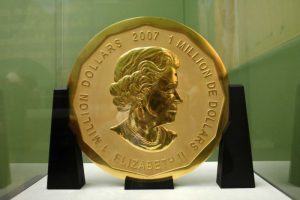 A Canadian Gold coin, 3215 times larger than the normal one ounce Gold coin, has been stolen.

On the security side, the thieves climbed up a ladder and went through an open window.  Seriously?

On the monetary side, if someone printed a dollar bill, 3215 times larger than the normal one dollar bill, would anyone bother to steal it?

Thieves are stupid, some security companies are obviously stupid also, but none come close to being as dismally dumb as Keynesian economists.