This article is lifted in its entirety from The Spectator Australia.  While I am no fan of the tabula rasa theory, the science of genetics is about as advanced as that of most other sciences – not very.  There are other, far more credible, reasons for violent behaviour, including a sane response to a survival threatening situation.  Nevertheless, overall, it is a keen insight and worth publishing. PB

The author is David Archibald and it was published on July 4th in The Spectator. 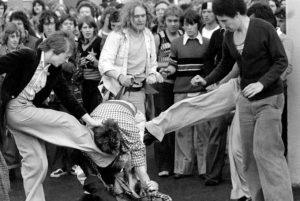 The current animus from the left, culminating in the attempted murder of a number of Republicans in Washington, has led some to ask if another civil war is upon us. We conservatives don’t seek such a thing, but if it is forced upon us we should not worry too much. It would be cathartic – painful to experience but the world would be a better place afterwards. It would be better because we would win and there would be less socialism afterwards, much less.

The reason for that has its origins millions of years ago on the plains of Africa. The human line split off from the great apes six million years ago. We might share 98 per cent of our DNA with our closest related species, the chimpanzee, but the differences that make us human are quite profound. The biggest is our big, energy-hungry brain. For starters, to be able to get that brain out of uterus, human babies are effectively born nine months premature. From birth, it takes human babies nine months to get to where all the other mammals start from.  And the brain’s demands just keep increasing. The brains of human three to five year olds have a 40 percent higher energy demand than adult brains. And the energy supply has to be constant otherwise the infant brain might suffer permanent damage.

In chimpanzee family life, well there isn’t any.  The male does not provide food to the female or the fruit of their loins conjoined. The mother provides for herself and the infant learns to forage very early in life. It is a different story in humans. The mother by herself cannot provide the large and constant food supply that the infant requires, so human pair bonding was invented so that the male would contribute to the pool from his efforts at hunting. In fact in Stone Age tribes, females aren’t net positive food contributors to the tribe until the age of 43.

Non-procreational sex was invented as part of the glue for the pair bond. Even that wasn’t enough because hunting success is patchy and the infant needs food every day. In northern regions where the ground was frozen for months, male hunting success was the only source of food for a good part of the year. To overcome the problem of hunting patchiness, group food pooling behaviour was developed, and to some extent likely coded in our genes.

That was a big problem because it was also the invention of socialism and kept us back for hundreds of thousands of years. Stone Age tribes work on the basis that all large game, perhaps larger than a rabbit, is shared out in the tribe so that nobody misses out. In fact two percent of conversations in some stone age tribes ended in violence over the division of game.

In Palaeolithic tribes in the tropics and temperate regions, men, hunting in a group, would bring in about half the calories. The game they brought in would be divided up between the families in the tribe equally such that all the children lived in nutritional homogeneity. No matter how good a hunter might be, his children fared no better than anyone else’s. This evened out hunting success which is patchy for big game. By comparison, the nutritional state of chimpanzee infants is directly related to their mother’s foraging success.

The alternative would be for individual hunters and their families to catch and kill their own.  But even the best hunter would have days on which his children went hungry with consequent brain damage.  At the same time there was no incentive to work harder.  Hunting got you killed and if you kept working then you were just feeding someone else’s family. A consequence of all that is that evolution was very slow.  There was group selection and we can see that in the displacement of the Neanderthals and others.  But the selection pressure within the group was slight.

So our antecedents invented a form of communism to keep the children fed. That held sway for a couple of million years right up to the invention of agriculture which turned everything on its head. Hunter-gatherers had no way of storing food. Agriculturalists could store large quantities of grain which would carry them through the bad patches. Suddenly, instead of extra work getting you killed in a hunting accident, the more work you did, the more likely you were to survive. Human evolution sped up dramatically post the invention of agriculture only 10,000 years ago. In this context, Republican Congressman Steve Scalise is the latest casualty in a battle that began with the agricultural revolution.

Marxism provided an intellectual veneer for group food pooling behaviour in the industrial age, and the welfare state enforces it. When there is a work requirement as a quid pro quo for that welfare, demand drops as per our theory.

The proclivity to work or not work has a genetic basis and the genes are close to being identified. The fact that there is a laziness gene in the human genome shouldn’t be a surprise because there are genes for other things such as violence. Thankfully, the violence genes were largely rinsed out of western society over the last thousand years thanks to the execution of murderers by the state as detailed by Steven Pinker in “The Better Angels Of Our Nature: Why Violence Has Declined”. One thousand years ago, England had a murder rate similar to that of current day Afghanistan which is thirty times higher than the current English murder rate. What happened in between is that the English judicial system rinsed out most of the genes for impulsive violence. Afghanistan and places like it never had that rinsing and thus they have a genetic disposition to much higher levels of violence than what we are used to.

Rinsing socialism out of the human genome through the judicial system will take forever. A civil war would speed up the process handily. But after we had won, would there be any downside to that? Not at all as it turns out.  Conservatives are innately better people anyway. To be specific, while lefties are concerned about care, liberty and fairness, conservatives are concerned about those things and sanctity, authority and loyalty as well. Conservatives also have more empathy.

Viewed correctly, socialism is caused by recessive genes that want to drag humanity backwards to before the agricultural revolution. If it is going to take a civil war to rinse out those bad genes, so be it. It is going to be worth it.