Yesterday, some friends asked me what I thought was going to happen with Gold.  It brought forth the usual answer: “Nothing, Gold will do exactly what it has done for thousands of years – remain stable”, or words to that effect.

A reminder of my graph from a post last year on the price/value of Gold.  It remains 1. 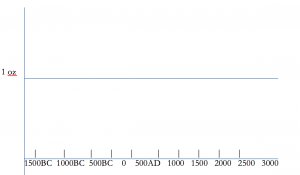 It is necessary to frame any question with as much precision as can be mustered in order to obtain the best chance of a valid answer.

Gold measures fiat, not the other way around.  The understanding of this reality prods the question of the likely ups or downs of fiats.  While still problematic, it is at least possible to apply some reasonable logic to that, not just pie-in-the-sky guesses about the ‘price of Gold’.

The answer?  Nothing much has changed.  Thus, there no reason why currencies in general will either strengthen or weaken at this point, though the volatility of their values will likely increase.

Any of the many international flash-points turning hot (China/India, India/Pakistan, South China Sea, Israel/Iran, Nth Korea, could change that in an instant.

Many factors could change the perceived value of currencies in an instant.

Any temptation to wish for the finale of the fiat crisis, as was expressed by another friend recently, should be tempered by an understanding of what that really means.  World War 2 became inevitable, but no sensible person wished for its commencement.  When it arrived, reality was uncompromising and non-negotiable.

The smug satisfaction of being proved right, at last, will be scant compensation.

Success in all aspects of life, from marriage and business to survival itself, depends upon the courage to see what is in front of one’s face, intelligent prediction and the ability and willingness to act sensibly upon that prediction.

And to be sure in oneself.