They lie, they cheat, they steal, they are promiscuous, they indulge in violence against those who disagree with them, they abhor free speech and they are revolted by the idea of individual freedom.

Black-clad fascism is on the rise again and it is no prettier now than it was back in the 1930s. 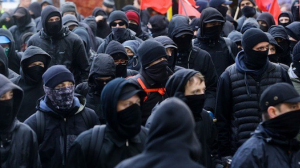 Those qualities they despise.

Hillary was more their cup-of-tea.  A mean, elitist, greedy, lying and deeply corrupt woman who lusts for power over the lives of others.

Hillary was a fascist’s wet dream.

Never forget that when The Donald produces a watered-down version of what he promised – the alternative was Hillary.

You’ll forgive him anything.

He has not only single-handedly re-created a conservative force in America, his influence can be felt around the world – even in Australia.  Look how brave the conservatives suddenly are in articulating their views.  It was unheard of before The Donald.