Those who claim that the paper in your wallet/purse is worthless, are exaggerating the case.  As long as it can still be exchanged for goods, then it obviously is not worthless. 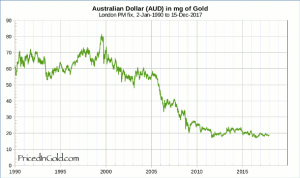 Over a longer time, it would show an even steeper decline.

A more telling example would be the Zimbabwe dollar or the Venezuelan Bolivar.  While these are extremes of bad governance, there exist other fiats that are falling further and faster than most of us would be comfortable with.

Gold is the only way of guaranteeing you immunity to such loss of value.  Gold’s value is stable – throughout all time and all places.

But it is not just individual currencies that you need shielding from. Today, almost all fiats are interlinked.  National reserves are held in the fiats of other countries.  When a major fiat fails, there will be contagion and all fiats will be at risk.  Under such conditions, a seemingly strong fiat can fall in value precipitously overnight.

At some point, all fiats will collapse to utter worthlessness.  That is a fact, though I make no claim to knowing when.

We all need fiat for our day-to-day transactions, but we also need Gold to ensure that the wealth that we have accumulated over a lifetime of production is not destroyed by delinquent governments.

Those who hold Gold and/or silver are those who will help to retain the remnants of our civilization and will contribute to building the next.