I pulled this graph out of an article that expressed concerns about the downtrend in Australian jobs.  The graph shows job ads and, understandably, it has proven a reliable indicator for future employment trends. 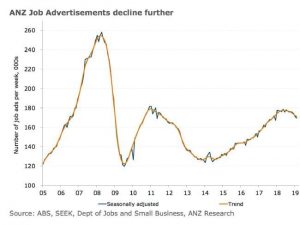 The article didn’t mention the cause of the drop.  The Liberal Party dropped a vote-winning Prime Minister in a palace coup and elevated a left-wing sleazebag called Malcolm Turnbull into the job.  When the polls demonstrated the obvious – that he was incredibly unpopular with Liberal Party voters – he was in turn ditched for a middle-of-the-road ditherer named Scott Morrison.  Morrison is not impressive, but at least he is inoffensive.  He is the male equivalent of Theresa May.  They stink, but in a jolly nice way.

Australia has a general election in two months and, with the Liberals having shot themselves in the head, a Socialist by the name of Bill Shorten will become Prime Minister of Australia.  He’s even more left-wing than Malcolm Turnbull.

Shorten will be under pressure to repay his union faithful by not only giving them well-paid government jobs, but by raising wages across the board.  He is expected to succumb, which will kill tens of thousands of businesses that are operating at the margins.  That Shorten will win is accepted by ‘everyone’, thus, no one in their right minds is employing anyone at the moment – thus, there are fewer job ads.  It is not that hard to figure out.

The Australian economy has been crushed by legislation; businesses are struggling to survive.  We are on the cusp of something very grim in Australia.  I’m withdrawing from the market and taking such Gold as I can get out with me.  It is time for a spot of country living.